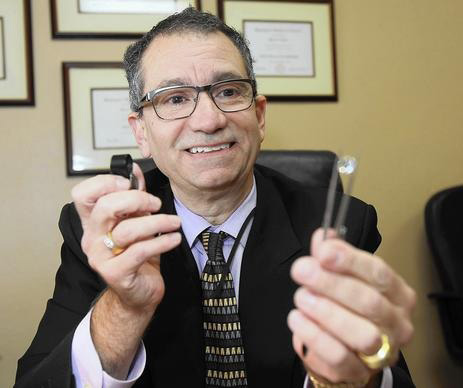 (Diamond) Mike Watson is giving away diamonds to two students who write the best essay to the prompt “Why Mom Deserves a Diamond.” Watson’s own decades long search for his biological mother led him to begin the contest. (Don Leach, Daily Pilot / January 2, 2015)

Through his decades-long journey to find his birth mother, (Diamond) Mike Watson learned that a single word — what many might believe to be a minute detail — can change so much.

For years, Watson searched for clues, often in the form of a word or two, that could help him paint a better picture of the woman who gave birth to him.

“We remember words forever. When we say or read them, they have the amazing ability to encourage, inspire and even heal us,” he said. “Throughout our lives, we remember the beautiful words that are spoken to us.”

In 1993, in the midst of about a 20-year search for his birth mother, Watson’s love of the written word inspired him to start a contest to give others an outlet to show appreciation for their own mothers. The contest would grow exponentially in the decades that followed.

Watson, the owner of the Gallery of Diamonds jewelry store in Newport Beach, asked Orange County children to write a short essay detailing why their mothers deserved a diamond. Some wrote about their hardworking single mother; others described the devotion of a mom who stayed home and made breakfast every morning.

Watson brought in local teachers to read the essays and select their favorites. In the end, two kids took their mothers into the shop, read their essays aloud and were given an unmounted quarter-carat diamond.

About 200 letters poured in the first year. Last year, more than 20,000 children entered the contest.

The deadline for this year’s essays is Jan. 15.

“It’s in honor of both of my moms — the one that had raised me and the one who I knew nothing about,” said Watson, 56.

The mission that led Watson to create the contest had its share of trials and dead ends.

It was never a secret that Watson was adopted. He grew up hearing the word often and was painfully aware of the differences between him and his adoptive parents in Indiana. Watson’s father was tall, pale and skinny, while he is shorter with a slightly darker complexion and curly black hair.

He always felt loved by his family — he was their “adopted angel,” he recalls his mother saying.

But Watson didn’t fully understand the meaning of the word “adopted” until he was teased by a classmate that his mom wasn’t his real mother.

Watson began asking questions, but there were few answers. For years, the only link he had to the woman who gave birth to him was the name Betty Price.

“When you look up to your mother and father growing up, you get an idea of what you’re going to look like in the future,” he said. “I’ve always had that burning desire to know where I came from.”

When he was 17, his curiosity led him on what he thought would be a 100-mile trip to a courthouse in Indiana to search for his birth family. However, the journey wouldn’t be complete until he was in his mid-30s.

He came up empty-handed on that first trip. A judge told him that documents related to his adoption were sealed.

Two years later, he returned to the same judge and asked again. He was given a single piece of paper thinly detailing the circumstances of his conception and birth and providing a description of the mother he never knew. He remembers grabbing the paper from the judge and furiously scanning the details:

She was short. So is he.

She wore “cheap jewelry and stale perfume,” the document stated.

He didn’t find such details derogatory; they helped form his first full image of his lineage.

“I wasn’t looking for a mother,” he said. “I just wanted to know my beginnings.”

After the first document, the search ran dry. But Watson’s thirst wasn’t sated.

Years passed and he moved to California, where he eventually opened Gallery of Diamonds.

In 1993, at the time he was reading letters from students responding to his first contest, Watson discovered a wedding license application that provided another puzzle piece in the search for his birth mother. The document led him to a name and then a phone number of his maternal grandmother.

When he called, and elderly lady answered. he gave his name, explained his situation and waited for the woman to hang up on him. She didn’t.

He learned that his birth mother had died 13 years earlier from complications of alcoholism.

She had told her family that her baby was stillborn. Watson’s relatives didn’t know he had been adopted.

“The contest became even more meaningful after that,” he said. it’s so important for kids to show their appreciation for their mothers, especially when they are living. Often those things go unsaid until it’s too late.”

Though only two mothers take home diamonds from the contest, Watson often gives other precious gems to finalists.

The only catch is that the students must read their essays aloud to their mothers.

“The real prize are the words these kids write,”he said. “Hearing those words is more valuable than any diamond I could ever give anyone.”