Welcome! We are happy you found us!

In 1991, my wife Carmen, and I turned our passion for fine jewelry into a lifetime career. Our small boutique focused on offering wholesale prices on loose diamonds and hard-to-find quality jewelry. Today, we have continued to design one-of-a-kind masterpieces while searching the world for unique treasures. We also have amassed a large estate collection that contains the most imaginative pieces passed down through generations.

At Gallery of Diamonds, you know exactly what you are getting and always receive a gemological appraisal.  We are so convinced that you will not find a better bargain on any jewelry piece on our site that we will refund all your money within 15 days if you find something else for less money.

Stop by to see us in person the next time you are in Orange County, California.

Michael (Diamond Mike) Watson was born and adopted in Indianapolis in 1958. He spent his early life in New Albany, where his adopted parents raised him. Watson entered the jewelry industry as an errand boy for a store in New Albany. He joined a retail chain and worked in jewelry stores in Indiana, Kentucky and Kansas City, then moved to California in 1989. [Source: “Watson Strikes Gold with Diamond Shop.” Tribune. Pg 6. August 6, 1992.]

His first job ended when the store was sold and the next one when the store went out of business. In 1991, Watson opened Gallery of Diamonds Jewelers in Costa Mesa, California. [Source: “Mother’s Day Contest Builds Business and Goodwill.” Jewelers Circular Keystone. April 1996.]

Watson obtained a copy of his hospital bill from Community Hospital, which showed his mother’s name (Betty Price) and age. Armed with this information, he embarked on a search that lasted nearly 20 years. [Source: Ibid. pg. 144.]

Watson found the judge who had presided over the adoption only to learn that the records were sealed. The judge did, however, give Watson the report by the Department of Public Welfare, which contained information about his birth mother. [Source: “One Man’s Search.” New Albany Tribune. 1995.]

The report listed names and a wedding date, and he contacted every county in Indiana to locate a wedding license. In mid-1994 he heard from the courthouse in Coatesville that the information on the license matched. He found that his birth mother’s maiden name was Stewart, and also discovered her parent’s address and telephone number. [Source: “The Search is Finally Over.” Newport Beach/ Costa Mesa Daily Pilot. September 16, 1994.]

When calling his biological grandmother, she said that no one knew he was alive because his birth mother told the family he was stillborn. He then learned that his mother had died in 1981. [Source: “Surprising Twists in Two Searches for Family Roots.” Los Angeles Times. January 28, 1998.]

The Why Mom Deserves a Diamond contest became increasingly important for Watson to allow kids to express their appreciation for their own mothers, especially while they are still living.

Over the years, the Why Mom Deserves a Diamond contest brought thousands of ethnically diverse families to Gallery of Diamonds Jewelers. In an effort to educate people of a broadened concept of mutual love and respect for people of foreign countries, Watson conceptualized a word that would mean, “the intense love and respect of persons from diverse backgrounds.” In 2016, with the help of wordsmith Doug Lowry, the word “uniphilarsian” was created, meaning “one who loves, regards, and watches over the unique aspect of every other person.”

Watson earned a Bachelor of Science in Business Administration from Indiana University Southeast and is a gemologist from the Gemological Institute of America. He is the author of Moon Over Mountains- The Search for Mom, The Legend of Why Mom Deserves a Diamond, Tales of Imagination- Everything is Real, In Search of Mom- Journey of an Adoptee, and Adopted Like Me- Chosen to Search for a Birthmother. “Search for Birth Mother Results in Special Book for Watson.” New Albany Ledger Tribune. May 10, 1998. The Orange County Register newspaper named him the winner of the “Holiday Spirit Award” in 1995, awarded to business owners who display the holiday spirit throughout the year. “It’s Your Business.” [Source: Orange County Register. December 25, 1995.] 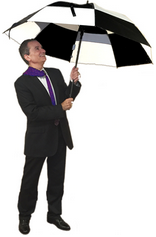