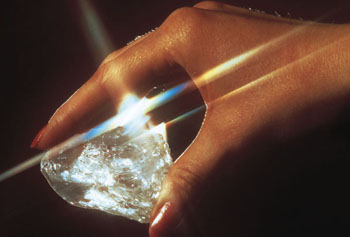 A diamond is born deep within the earth. When you combine unimaginable heat and pressure for about one million years, you beget a coveted gem that remains the hardest natural substance in the universe: crystallized carbon. (Believe it or not, the carbon in a diamond is the same element as the graphite in your pencil, with the atoms arranged differently.) Gemologists are still not sure, but we think the inclusions (or flaws) in diamonds are caused by the gradual temperature and pressure changes during the diamonds formation. Inclusions should not be regarded as bad, for it is these natural imperfections that give every diamond the uniqueness of a snowflake.